ESO, the European Southern Observatory operates an astronomical observatory at Mount Paranal in Chile, where one of the world‘s biggest optical telescope arrays is located – the Very Large Telescope (VLT).

redlogix worked for ESO over many years to develop significant parts of the VLT control software. With these - still ongoing - projects redlogix has gained comprehensive know how with the design and development of telescope control systems, instrument control software and interferometer software, as well as adaptive optics and motion control hard- and software.

ESO operates one of the largest optical telescopes on top of the 2,635-meter high Paranal mountain in the Andes. The facility essentially consists of four identical telescopes with an aperture of 8.2 meters each plus three 1.8-meter mobile auxiliary telescopes and the VLT Survey Telescope, a 2.6-meter telescope for wide-field imaging. The relatively thin main mirrors are kept in shape by active optics, i.e. more than 150 axial and lateral actuators on the back and the sides actively adjust their shape during operation for optimum performance. Further, optical distortions, caused by atmospheric turbulence are corrected by adaptive optic systems, whereby redlogix has been involved in hard- and software of the MACAO system (see MACAO).

The facility is completed by a set of high-tech instrumentation, mounted at the various foci of each telescope, as shown below. These instruments are mainly developed by partner institute consortia of ESO and redlogix provides development services for the instrument control systems. In this way we are working for the GRAVITY instrument. 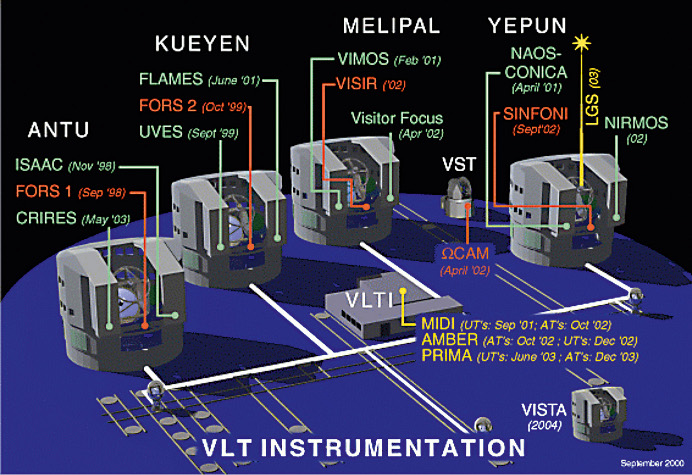 The individual telescopes can also be coupled with one another either in combined focus or in interferometry mode, the so-called VLT Interferometer (VLTI). When the final stage is completed, the system will have the resolving power of a single mirror with an aperture of 130 meters or total light-gathering power of a 16-meter mirror. redlogix also contributed and still contributes to the VLTI software (see VLTI).

A distributed approach was chosen for the control and operation of the telescopes, domes and instrumentation, and the system architecture makes use of extensive networking. The control functions are distributed through a network of dedicated VMEbus systems, the so-called local control units. The VxWorks real-time operating system, as well as Linux run on the PowerPC CPUs.

The original UNIX workstations under Solaris and HP-UX, meanwhile replaced by Linux, are used for higher-level coordination as well as for user interfaces, archiving, remote access, etc.

On top level, the VLT control system consists of several software packages, including the following:

redlogix has been involved in the development of VLT software since 1996 and still is. Our activities have included design, implementation, testing and documentation of drivers and low level software,  infrastructural components and applications, both at the LCU level as well as at the workstation level. The VLT software components implemented by redlogix included the following:

In extension to its development services, redlogix also provides support, since the VLT is in operation. This includes integration of new features, maintenance and troubleshooting, also on-site at Paranal.