SOFIA, the „Stratospheric Observatory for Infrared Astronomy“ is a joint project of the Deutsches Zentrum für Luft- und Raumfahrt e.V. (DLR; German Aerospace Center) and the National Aeronautics and Space Administration (NASA). This so-called "flying observatory" features a 2.5 meter aperture infrared telescope, mounted in a Boing 747 SP airplane, which carries the telescope to the stratosphere at altitudes of about 12 km, where infrared extinction by water vapor is negligible.

Despite the challenging environmental conditions to which it is exposed, the wind load and vibrations of a flying aircraft, the telescope must be positioned with extreme precision. The SOFIA tracking system therefore is complex. redlogix contributed to the system engineering and developed the complete control software for two intelligent Tracker subsystems: the Master Control Processor and the Tracker Controller Processor, including camera controllers for three different guide cameras. In recent time we contributed to the tracking system modernization and imager upgrade efforts. 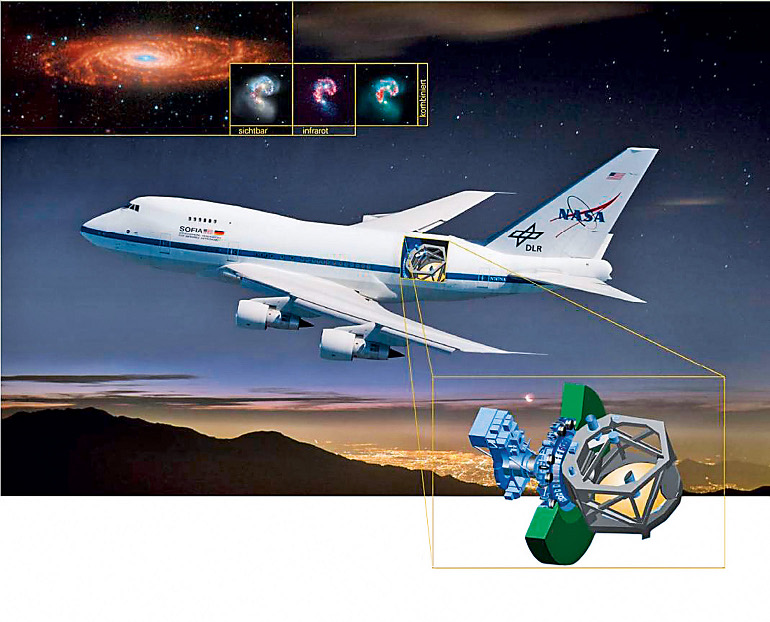 The heart of the SOFIA telescope is a parabolic glass-ceramic mirror with an aperture of approximately 2.50 m. The entire telescope construction has a weight of about 19 tons, located at the aircraft‘s center of mass. The major challenge involved in the development of the telescope control system was to meet the extremely high demands made by astronomers with respect to positioning accuracy. This problem was compounded by the rough operating environment encountered at altitudes of 12 km, and this is made all the worse by the vibration of the aircraft.

Pointing and tracking of such an airborne telescope is rather different then for a ground based telescope, since it is not directly coupled to the Earth rotation. Pointing in azimuth is primarily achieved by adjusting the heading of the carrier plane, since the telescope‘s slewing range in azimuth is only about ±2 degrees. In elevation, the telescope has an un-vignetted pointing range from 23° to 58°. The telescope is stabilized in an inertial reference frame by three gyroscopes.

The main task of the SOFIA tracking system is to compensate for residual deviations, mainly the gyro drift and other disturbances. In further contrast to a conventional telescope, due to the spherical mounting also the LOS rotation is an axis under control. 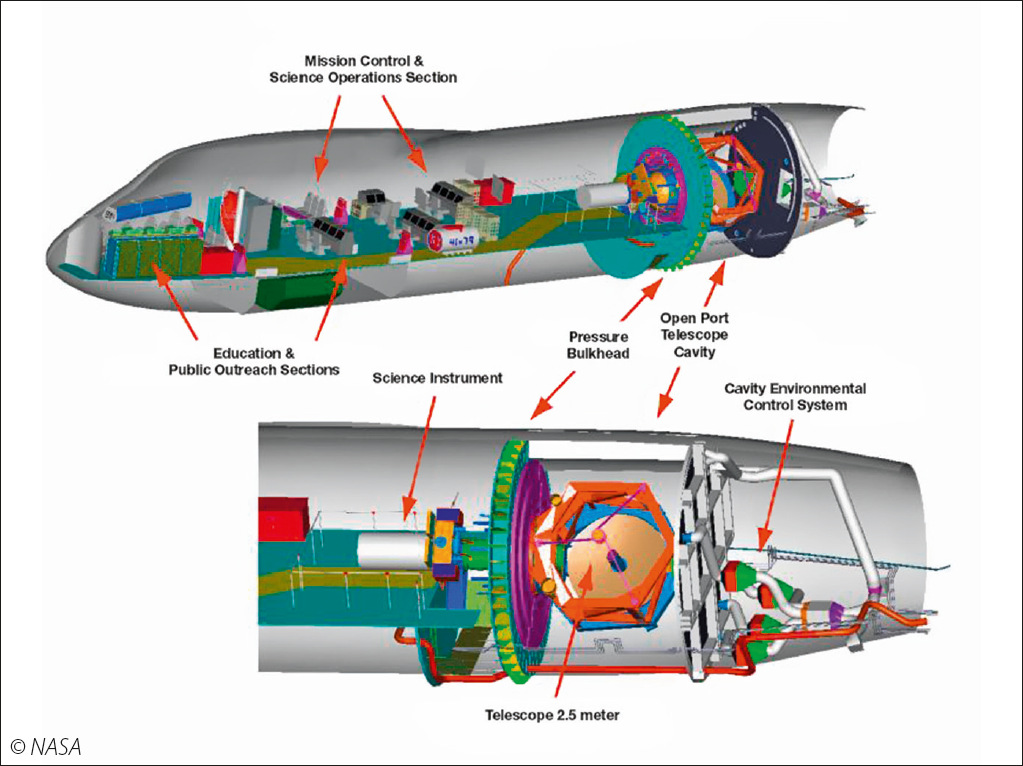 The telescope control system consists primarily of a distributed system based on VME bus. It includes intelligent systems such as the master control processor, the tracking controller, three camera controllers, the servo control unit, the secondary mirror controller and other components. TCP/IP is used for communication between the individual VME bus systems via Ethernet/fiber. The lower equipment level is coupled via CAN bus, for example, controls for the camera heads, filter wheels, the power distribution unit, the electronic components of the primary mirror, temperature sensors, etc.

redlogix developed all software for the Master Control Processor (MCP) and for the Tracking Controller (TRC) subsystems, including the camera controllers (CCP). The MCP‘s main purpose is to provide the central communication interface of the Telescope Assembly (TA) with the Mission Command and Control System (MCCS) and coordination of all subsystems involved in the operation of the telescope. The TRC Main application software is primarily responsible for the tracking loop and issuing motion correction commands to the TA Servo Control Unit, plus coordination of the three imagers, control of other periphery like filter wheels or temperature sensors and providing extensive monitoring information.

The MCP and TRC software is based on the VxWorks real-time operating system, while the modernized camera controllers use Linux. While VxWorks has its strength in hard real-time requirements, Linux provides a richer environment and platform for large applications with modest real-time demands. redlogix posseses expert knowledge with both operating systems.

Middleware developed by redlogix separates the application layer from the operating system and provides the project-specific services and infrastructure, including, for example, class libraries for the task system, inter-task communication, TCP/IP communication, data maintenance and logging. The highest level is the application level, which consists of an event-controlled, message-based multitask system. The task system is driven by the strictly priority-based preemptive scheduling of VxWorks. Each task implements an event driven state machine. Such events and all other data are exchanged between tasks by means of messages that are buffered in a separate message queue for each task. This type of architecture has been found to be extremely effective and is therefore frequently used by redlogix for more complex large scale real-time applications.

The MCP and TRC/CCP software was designed with an object-oriented architecture and has been implemented in ANSI C++.

The modern object-oriented approach, the application of design patterns and the implementation in C++ - even for small microprocessors with poor resources in deeply embedded devices - is one of redlogix‘ core competencies. We applied this to the SOFIA tracking system software with great success. Further, we provide training and products (see www.redblocks.de) in this area.