The concept of adaptive optics is one of the key technologies for the performance of modern large telescopes. Only by this technique are such telescopes able to unleash their resolution power and nearly reach diff raction limit in their optical imaging quality.

For its Very Large Telescope (VLT) the European Southern Observatory (ESO) developed several sophisticated adaptive optics systems. One of them is MACAO - the Multi Application Curvature AO - which is installed at the Coudé focus of all four unit telescopes and in the VLT Interferometer, i.e. six units in total. MACAO is in operation already since its first light in 2003 and still a workhorse AO system.

redlogix contributed to MACAO by development and maintenance of the High Voltage Driver sub-system which provides the actor signals and power for the deformable mirror, and by optimization of control  algorithms for the Real-Time Computer, on which the complex AO control loop runs.

Following the continuous development in the field, redlogix integrated the MACAO HVD into the modern SPARTA (Standard Platform for Adaptive optics Realtime Applications) concept in 2014.

A fundamental handicap of ground-based astronomical telescopes compared to space telescopes is the effect that the images of celestial objects are blurred by atmospheric turbulence - commonly known as the  twinkling of stars. The idea of adaptive optics (AO) is to measure these distortions of an incoming wave-front and route the light over a deformable mirror which is bended exactly such that the wave-front distortion is compensated. If this could be done perfectly, the result would be an undisturbed plane wave and a Strehl ratio near 1.

However, in practice the high frequency and spatial distribution of atmospheric turbulences put very high demands on the update rate, number and accuracy of the actuators for mirror deformation, as well as on the wave-front sensor. Further, a high numeric computation load is put on the real-time computer (RTC) to evaluate the wave-front sensors, compute the error and correction signal and send it to the High Voltage Driver at that high frequency. Therefore, AO systems are still a technical challenge and subject to further research and development.

Such an AO system essentially consists of the following components:

The MACAO system is characterized by

redlogix‘ contribution to MACAO was the conception, development and manufacturing of the HVD system, as well as of the high-voltage amplifier boards. Therefore we are exclusive supplier of these complete HVD systems to ESO, which are in operation at VLT and its instruments since 2003. Of course, we are also providing support and maintenance for these systems. The HVD is designed as a 19“ rack VMEbus system, gaining all the advantages of this standard technology, like long-term availability and scalability. Both of these properties are essential for the intended operation period of 2–3 decades. 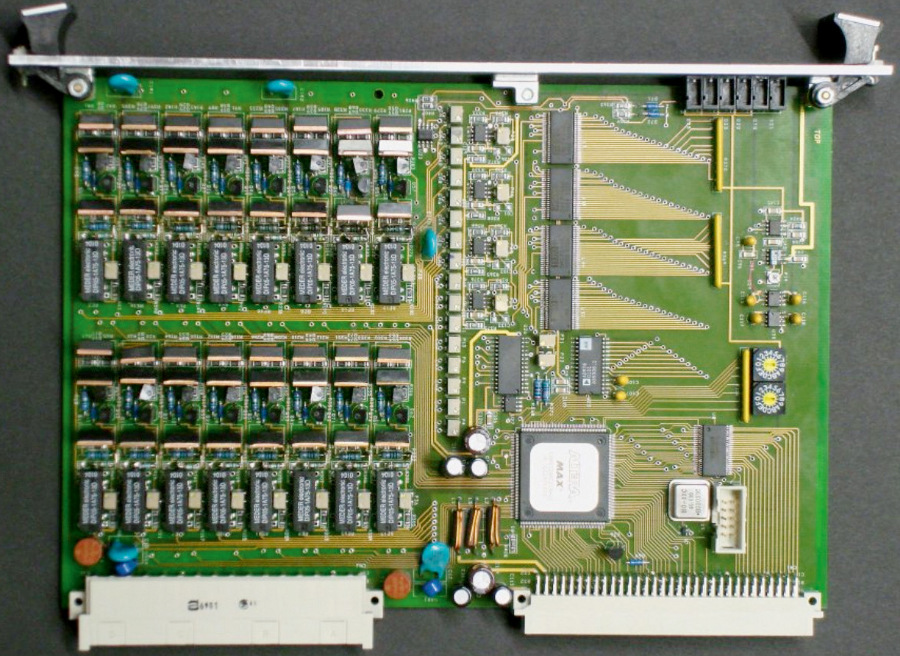 The system conception also considers the special environmental requirements of observational astronomy with respect to heat dissipation, extended temperature range and remote operation and service. VMEbus master is a Motorola CPU board, based on PowerPC architecture. It runs the software for communication with RTC, transformation of actuator settings into voltages, control of high-voltage amplifier boards,  flexible and scalable system configuration, temperature monitoring and system housekeeping. This software has also been developed by redlogix. Wind River‘s VxWorks is used as real-time operating system.

Communication with RTC is via a high-speed fibre link, at both ends controlled by a FibreXtreme piggy-back board. The complete link and an access library has been provided by redlogix, also at RTC side. Additionally a housekeeping link to RTC, also on fibre base, but adapters converted to RS232 is maintained. Further piggy-back modules serve the monitoring of temperature sensors and a couple of digital I/Os.

In 2013–2014 the HVD system has been modernized with new VME boards and the control software has been ported to VLT standards and integrated with the SPARTA platform. Serial line communication has been replaced by Ethernet. A completely new HVD system has been delivered by redlogix in 2013. With this step a further operation of the MACAO system at least up to 2020 is possible.

This activity included commissioning of new algorithms on site at the La Silla Paranal Observatory.